During NIS America’s 2016 press event the company announced they will be releasing three new games and porting two of their existing games to PC.

PSYCHO-PASS: Mandatory Happiness is coming to North America and Europe for PlayStation 4 and PlayStation Vita as a physical and digital release, as well as digitally on Windows via Steam in Fall 2016. Taking place during the time span of the first season of the anime series, this game adds backstory and world building to the overall series as well as in-depth storylines to each of the newly introduced characters. 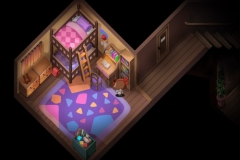 Touhou Genso Rondo (working title) is coming to North America and Europe for PlayStation 4 in late 2016. Developed by CUBETYPE, Touhou Genso Rondo is a remastered shoot ’em up that takes place in the Touhou universe.
[Show slideshow]

The two existing games NIS America plans to bring to PC via Steam are htoL#NiQ: The Firefly Diary and Criminal Girls: Invite Only. HtoL#NiQ: The Firefly Diary was originally released for PlayStation Vita in March 2015, and is set to hit Steam on March 14. Criminal Girls: Invite Only was also originally released for PlayStation Vita in February 2015 currently there is no release date for the Steam version of the game.