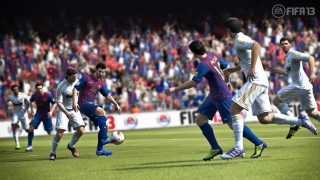 Almost without fail EA Sports has released their latest football game FIFA 13. This year’s edition promises a lot so let’s see if it lives up to its promises.

The last FIFA game I played was FIFA 08. I had stopped because the series began to bore me with myself feeling that it began to get stagnant. With FIFA 13 EA Sports changes to the AI, changes to free kicks, new modes and more which grabbed my interest in the game series again.

One of FIFA’s strongest points is that is contains so many licensed players, clubs and leagues. Just like last year the game has 30 official leagues, 500 officially licensed clubs and more than 15,000 real players in the game.

One of biggest things about FIFA 13 was the array of changes they put into matches. FIFA 13 saw the inclusion of attacking intelligence, improved dribbling, first touch control, player impact engine and tactical free kicks. These new additions made the matches more lifelike and added more challenge to the game. 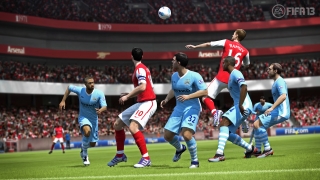 “Attacking Intelligence” brings an extra dimension of realism to the game with attacking players trying to run into space etc. I found it helpful and made scoring on counter attacks easier. The dribbling improvements known as “Complete Dribbling” provides improvements to dribbling, but personally I have never really cared for dribbling in FIFA games and I feel it isn’t really something that needs a lot of focus, but with that said I do enjoy using the dribbling to knock the ball past a defender to get a better cross into the box. While I enjoyed the improvements Attacking Intelligence brought, I enjoyed the new “First Touch Control” system which was added to the game this year. The new system allows you to control passes easier and as such passes to the another players feet are less likely to be poorly controlled and lost, but with that said it didn’t making controlling overly easy as the system threw in a lot of factors to try and stop you from controlling the ball from passes, the system would factor in pressure, trajectory, velocity and more. The new additions and changes really do make the game worth buying.

FIFA 13 didn’t just bring new features to the pitch it also brought a host of new or improved game modes. The additions include an improved career mode, skill games, EA Sports Football Club Match Day, FIFA Ultimate Team, seasons and pro clubs seasons. Personally I enjoyed career mode the most because you got to play the role of a manager and player which meant you had to manage transfers, transfers, team line up and more and of course you had to perform well on the pitch. The other additional modes provide a good extra for football fans with FIFA Ultimate team being another stand out game mode for me apart from career mode since it allowed you build your dream team and take part in ranked online matches. Skill games is a great mode for new players to learn about some of more difficult part of the games skills by allowing you to complete shooting challenge , crossing challenges and more.

FIFA 13 has an online service called EA Sports Football Club which allows you to level up and unlocked rewards, give you access to live challenges, play online with friends and more. But at the time of writing this review the service isn’t exactly stable with it going down at different times. 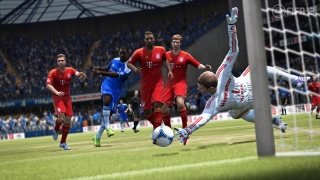 The animation and model quality is brilliant in FIFA 13 with player’s movement almost mirroring their real life counterparts and models make players easy to identify as they look pretty similar to their real life counterparts yet again. Commentary is once again top notch with commentators drawing you into the game and giving out random bits of information about the teams playing. The game does have issues with players running through what should be solid objects like advertising boards and celebration animations going crazy being the most noticeable issues. Finally the cardboard cut out fans in the stand is still present and is rather immersion breaking when you see them up close.

Overall FIFA 13 is arguably one of the best football games available at moment. It brings a raft of new challenges with on pitch action becoming more competitive and challenging and more game modes and challenges to sink your teeth into. Animations, models, commendatory and soundtrack are also great editions to the latest game. There are issues with EA Sports Football Club going down on occasions, but other than that there is no other glaring issue.

If you are looking for a sports game to play this year you can’t go wrong with FIFA 13.