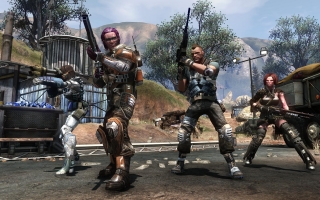 Trion Worlds has today revealed the pre-order bonus and the contents of the digital deluxe and Collector’s editions of the upcoming subscription free mmo, Defiance.

The pre-order and various editions include the following bonus content.

Defiance Ultimate Edition ($149), available only at GameStop, adds the following to the Collector’s Edition:

For more information about the pre-order versions of Defiance, visit http://defiance.com/en/pre-order.

In Defiance, players embark on a journey into a futuristic online open world shooter where the survival of Earth relies on their skills as an Ark Hunter, as they level up in massive co-op battles and fierce multiplayer combat. Players can also hunt alone while improving skills and unlocking powerful modern and alien weaponry that is essential for survival in the constantly evolving online world. Defiance invites gamers to explore vast landscapes on a variety of vehicles while leading the charge in huge co-op battles. Immerse yourself in the world of Defiance as the game impacts, and is impacted by, the Defiance TV series.