On May 11, 2018 by Aaron Meehan
Kratos returns, and after defeating Zeus on top of Olympus, he wishes for nothing more than a fresh start in a distant land with his son Atreus. When we join the God of War, his wife has passed and he must embark on a mission to honour her last request, scattering her ashes from the tallest mountain in all the realms. While such a journey sounds easy, Kratos is embroiled in conflict with the Norse gods who look over all of the nine realms. Kratos and Atreus face a journey that will see the father and son fracture, understand each other and finally learn that family stick together no matter what.

God of War is an incredibly strong character driven game, with the game putting a strong emphasis on the struggles that Kratos and Atreus must overcome. These struggles aren’t just physical obstacles as we see Kratos struggle to reconcile with his past, and become a better father to Atreus. The main characters of Kratos and Atreus are not the only ones who have struggles as side characters such as the dwarven brothers, Brok and Sindri, must learn to realise that they are better together than they are apart.

Going further into the characters, Kratos is far more than he appears, while he is a strict father who is quick to point out Atreus’ mistakes he opens up more and more to his son as the game progresses. Atreus also gets a lot of development, at the start of the game he follows his father’s words without question, but as the game progresses his character does begin to grow, but this growth isn’t always positive.

In terms of how the story plays out, it primarily takes place on Midgard (Earth), but players are able to visit the other eight realms from Norse mythology, these include Helheim and Alfheim. For those who enjoy Norse mythology, God of War is a treat as the story holds no punches when it comes to depicting the Norse gods with the likes of Thor depicted as a rather ruthless tyrant and Baldur acting as a loose cannon. What I really enjoyed about the story was the otherworldly feel of the game as you traverse the world tree and talk to the World Serpent, a serpent so big that it encircles the world.

God of War truly shines when seen as a father and son adventure, the character growth isn’t one dimensional or just used for window dressing, when Kratos and Atreus argue or fight the effects linger throughout the entirety of the story.

Now, let’s look at the combat, and well the combat in God of War is a treat with fast and fluid melee and ranged combat. In God of War, Kratos has a brand new weapon the Leviathan Axe, this powerful one-handed axe is much more than it appears because not only does it do ice damage, but you can throw the weapon and immediately recall it. Atreus also helps in battle by providing range support with his various arrows. Now as I said combat in God of War is fast and fluid and the reason for this is due to how you can go from a melee of light and heavy attacks to performing defence moves such as rolling away from attacks or using your shield to not only block but parry attacks if you time the block right.

Apart from your regular offensive and defensive move sets Kratos has various abilities, the most prominent of which being Spartan Rage, which allows him to go into a rage and heavily increase his damage output, to use Spartan rage you need to fully fill your rage meter. Kratos also has runic attacks attached to his talisman, light attack and heavy attacks. These runic attacks, which are unlocked through various means, gives players an additional attack option when using their shield. Runic attacks include charging at enemies with your shield and a quick healing burst.

God of War also has a talent tree that allows you to improve your various combat styles, but annoyingly a lot of the talents are locked behind rather large stat requirements.

Now, remember I said Kratos can throw his axe and immediately recall it, well this ability isn’t just something that is great for taking out ranged enemies as it more often than not a tool that helps solve many of the game puzzles. The Leviathan Axe helps with puzzle solving by allowing you to rotate objects as well as stopping objects by throwing your axe and freezing it until you recall the axe. The puzzles in God of War are deceptively easy, I often spent several minutes trying to find out how to complete a puzzle only to realise that the solution was staring me in the face.

So, what else is there to say about God of War, well the game does have a crafting system, which allows you to upgrade the stats of your equipment. Crafting is a straightforward experience with crafting materials coming from the likes of boss battles and chests, once you have gained enough materials to upgrade your equipment you need only visit one of the dwarven blacksmiths.

After fighting, crafting and following the story, what else is there to do in God of War? Well, there is simply exploring the nine realms, finding treasure chests, taking on favours/side quests for the dwarven brother and fighting the various Valkyrie hidden in the game.

Looking at God of War’s graphics, there isn’t much to say apart from the fact the game is absolutely beautiful with each realm using colour and objects to separate themselves from each other. However, on the base PlayStation 4, I did notice the occasional drop in frame rate. In terms of audio, the orchestral music is amazing, with slow soft tones rising to an almost overwhelming crescendo of sound that made every scene that much more spectacular. 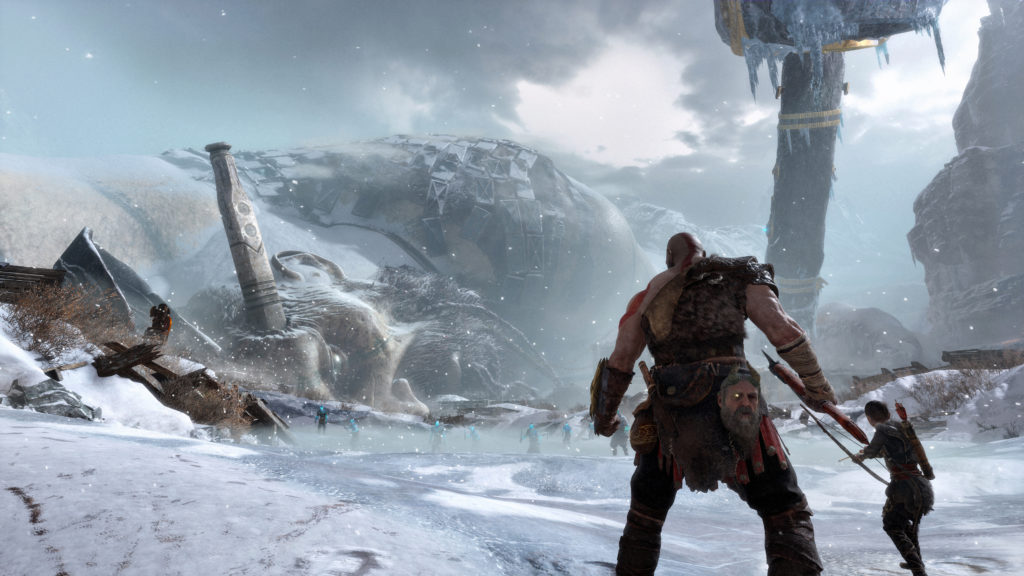 God of War (2018) is an amazing character-driven single player story game. The relationship between Kratos and Atreus is just one part of what makes this journey through the nine-realms an unforgettable masterpiece.

For more information on God of War, visit http://godofwar.playstation.com/