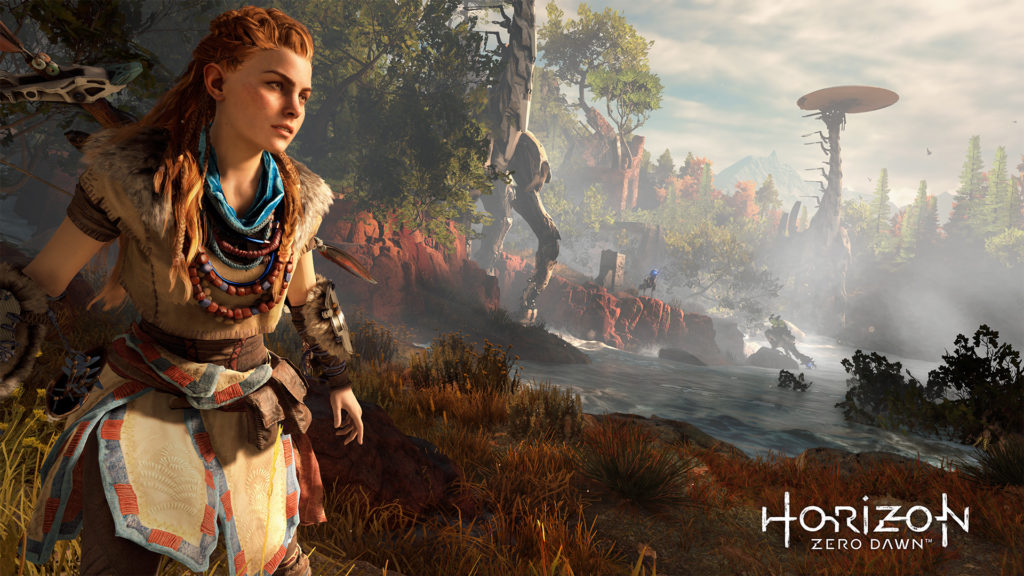 Horizon Zero Dawn is a brand new IP from Guerrilla Games (Killzone series) and published by Sony Interactive Entertainment. Horizon Zero Dawn is an open world game that takes in a post-post apocalyptic world, with the world is now populated by tribes of humans and robots known as “machines” by the various tribes. In the game, you play as Aloy, an outcast from the Nora tribe. When the game begins Aloy has one goal, find out who her mother is, but this one goal reveals numerous buried mysteries.

The story of Horizon Zero Dawn primarily focuses on Aloy’s desire to find out who her mother is, and so to get answers from her tribe she needs to win “the proving”, as the Matriarchs know something about her mother. However, Aloy’s goal isn’t straightforward as the tribe is attacked and the information about her mother cannot be learned from her tribe, and so Aloy is named a “seeker” and leaves the tribe with two goals, 1)find out who attacked her tribe and why, and 2) find out about her mother. These two goals will reveal what happened to the “old ones” (you and me) and the nature of the machines that dominate the landscape.

In terms of characters, I never had any issues with the people you meet and interact with have well fleshed out personalities, especially Aloy, who at the start of the game was an outcast, but by the end, she shows everyone that even an outcast can change the world. Other not worthy characters are High Matriarch Teersa, who is supportive of Aloy from birth despite your outcast status, and Erend, a man treated in high esteem by the Carja tribe after they overthrew their warlike king.

Before getting into the gameplay, I think it is important to talk about “The Machines”. There are multiple types of machines, with the majority resembling animals, for example, the Striders look, act and sound like horses, which make them the perfect mount. I personally love the design of the machines, as they feel both natural and alien, by that, I mean they look like something familiar, say a horse or crocodile, but when you get up close they are covered in metal, weapons and so are almost otherworldly.

Now, let’s talk about gameplay. The gameplay for me is what makes Horizon Zero Dawn exciting with its interesting weapon loadouts, crafting and trading. Weapons in Horizon Zero Dawn are broken down to bow, tripwire gun, ropecaster and sling. Each weapon has their own set of ammo, which you make by crafting parts from fallen machines and gatherable materials. Interestingly, the weapon you hold determines what ammo you can use, for example, the “Carja hunter bow” uses normal and fire arrows, while the “war bow” uses shock arrows.

Combat is also more than just shooting an enemy until it dies with the majority of encounters, especially later in the game, requiring you to use all your weapons to its fullest. For example, the ropecaster, which is great against fast enemies, can fire bolts that slow down and temporarily knock down enemies. Knowing your enemies weaknesses is also important, and so to find them, Aloy uses the focus, a piece of old-world technology that scans enemies for weaknesses along with helping her to explore ruins.

Now I brought up trading and crafting. Trading is a mixture of hunter-gatherer and currency exchange, as to buy outfits, weapons etc. you need to trade metal shards (currency) and items that can only be found from a machine, for example, the “Nora silent hunter medium” requires 200 metal shards and 2 Watcher Lenses. This means you have to decide whether or not to trade items you gain from downed machines as said item could prove to be a vital in gaining a new piece of equipment.

Crafting is straightforward, you collect the items you need and press and hold the x button to make the item you selected. Crafting is primarily used for making ammo for your weapons, which I will say is handled well because when in battle you can call up your weapon wheel and quickly craft additional ammo without slowing down the game. Crafting also involves modifying weapons and outfits with stat boosting coils and weaves. In the end, crafting helps the game run at a smooth pace, as you don’t need to constantly look for ammo.

I just want to say a bit more about combat as the skill/levelling system helps enhance it as you level. As you get further into the game, you can perform a “silent takedown” aka stealth kill, and slow down a battle with “concentration”, this ability is useful for hitting weak spots. Speaking of weak spots, it is important to always try and target them as it helps speed up fights. I also recommend learning their elemental weakness because it helps speed up an encounter.

Now as I mentioned there are side quests you can perform alongside the main story quest. Side quests are broken down into several types: side quests, errands, bandit camps, tallnecks, hunting grounds, cauldrons, corrupted zones and tutorials. In terms of world building and experience points, they are important.
When it comes to issues I didn’t notice many, but with that said, one side quest “Hunter’s Blind” was glitched and impossible to complete. I bring up the quest, as this side quest is important to getting the best possible ending.

Horizon Zero Dawn is an enjoyable post-post-apocalyptic game that offers an engaging story, and a world filled with powerful machines to fight and ruins to explore.