NIS America has released a collection of new screenshots and videos for the upcoming JRPG, Hyperdimension Neptunia Victory. 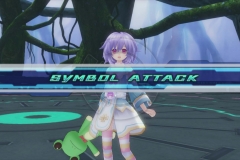 Hyperdimension Neptunia Victory takes place several years after the events of Neptunia Mk2. The CPUs and their younger sisters have been enjoying their quiet lives for a while… Then one day, the CPU of Planeptune—Neptune—is sent to another dimension. This new dimension feels very much like her own…except it has only progressed to the Gamindustri of the 1980s. In this dimension, a group of villains calling themselves the “Seven Sages” are trying to create a world free from the rule of CPUs. With help from her new friends, including that dimension’s CPU of Planeptune—Plutia—Neptune begins her quest to protect a totally different Gamindustri in her brand-new adventure!

Hyperdimension Neptunia Victory will be available on March 15, 2013 for PlayStation 3.